Did you know that even if your IoT device board does not have a hardware ethernet interface, you can still use standard networking methods to make your software design easier?

This is because networking is not just limited to devices that have an ethernet interface.

Networking is about efficiently transferring data between multiple nodes.

The moment you have "more than one sensor connected to a gateway" scenario, you NEED networking.

Networking is for any device that uses:

Networking is all about making sure we can reuse the same physical channel effectively to send data to multiple other devices and by reusing existing network stack you ensure that you don’t need to implement data transfer logic yourself from scratch.

What we will cover

In this article, I will demonstrate how networking functions within the context of a UART interface. Specifically, we will utilize a UART as our physical layer and transfer network packets transparently over it, allowing us to use the networking stack on our embedded device and communicate with any computer on the internet.

The goal is to set up full packet routing across our embedded infrastructure using the Swedish Embedded SDK/Zephyr RTOS and Linux. We will be using Zephyr RTOS networking because Zephyr already offers a comprehensive networking stack, and we will use Linux on the opposite end of the UART connection.

This setup is particularly useful when you have a BTLE or LoRA enabled microcontroller and a UART connection to a Linux CPU, which is common in robot control applications, mesh gateways, and distributed sensing solutions.

In such scenarios, the Linux module on your board acts as a gateway to the outside world, while the microcontroller handles low-level communication with machinery.

If we can successfully set up networking and our Linux device is connected to the internet via a conventional LAN, then we can simply set up routing on the Linux board and our microcontroller will be able to communicate with any internet IP address, allowing us to send MQTT or CoAP packets to a message broker service without any extra software besides existing Zephyr modules and libraries.

This involves several steps that we need to cover:

After this we will be able to run our MQTT publishing example and be able to route packets to our MQTT broker through our linux machine. We will do all this in simulation so no hardware is needed for following the content of this article.

To make the process simple I have provided a script in Swedish Embedded SDK that installs all necessary tools locally. Although you can use "swedishembedded/build:v0.24.6" docker image as well.

Here is how to install all tools locally:

A networking stack is a piece of software that accepts raw data frames as input and allows applications to register callbacks to receive data addressed to them. On a conventional system, these callbacks are implemented using sockets, which are a convenient way for userspace applications to interface with the low-level kernel networking stack. The application can then simply wait for data on the socket and execute code once data is available.

Sockets are simply data streams with an address (IP+port), and the networking stack ensures that incoming data flow is directed to the correct recipients.

When you need to route messages in your IoT firmware, be cautious about trying to create your own protocols for message routing. It is likely that your newly invented protocol will not be sufficiently robust or will simply be a re-implementation of an existing solution (often much worse).

There are several ways to get data into the networking stack:

Of course, having a physical ethernet interface has many benefits, such as robust and fast transmission on the wire and hardware caching of incoming packets. Some physical interfaces on specialized SoCs (like Broadcom) even support direct DMA transfers between networking adapters, resulting in a significant speed increase when passing packets between ethernet and WiFi, for example.

However, we are trying to cover a particular case here with a custom gateway solution where an ethernet interface is not available on the microcontroller.

We must therefore pass the ethernet packets over UART.

We cannot simply pass packets to the UART because a UART is designed to handle bytes of data.

UARTs are known for losing data at any time and it is also possible to miss an incoming data stream if the board is performing a very intensive task and is unable to respond to the UART interrupt in time.

To address this issue, several framing protocols have been developed, including:

In this article, we will be using SLIP.

Zephyr has a sample called samples/net/mqtt_publisher but it does not support SLIP out of the box (at the time of this writing).

Therefore, we need to enable SLIP:

What we are trying to do here is configure our Zephyr board to have an IP address of 192.0.2.1, which will be the address that the networking stack considers its own. On the other end of the UART, we are connected to a virtual TAP interface which will have the address 192.0.2.2.

The router for us from the Zephyr side is the Linux machine which has the address 192.168.10.10 which is the local gateway where all packets coming out of the Zephyr interface should be routed if their destination is "outside world".

When we pass a packet to the networking stack on the Zephyr board, if the packet is destined for any address other than our own, the networking stack will try to resolve the gateway MAC address using ARP and then send the packet to the network with the gateway’s MAC address embedded in the Ethernet frame. This will effectively make the packet arrive at the Linux board and then the Linux board will decide what to do with it (for example, taking the MAC of its gateway, overwriting the Ethernet frame destination with it, and then passing that frame further out until it reaches our MQTT server).

Routing on the Ethernet level is simply about two things: determining which wire (essentially networking interface) to send the packet to (which is determined by the routing table) and then writing the packet to that wire with the correct receiver ID (MAC address).

As the packet passes through Ethernet switches, it will be copied into many other wires, and the Ethernet adapter that has the given MAC address will then accept the packet and the networking stack managing that adapter will then process the packet in the same way.

So the concept is really quite simple. We just need to have a way of passing these frames over a UART wire instead of an Ethernet wire.

We are going to use QEMU simulation so we can build our application from Zephyr directory like this:

Make sure that you have updated the prj.conf to include SLIP support!

If you just run that build command, you will get an error:

If you don’t see this error then you have not configured SLIP in the project build options so make sure you can see it.

The QEMU board defines "uart1" for use with SLIP, but the method that Zephyr uses in the main repository is limited. This is because it uses a "uart-pipe" device, which is an artificial driver that can only be connected to a single uart. If you want to have multiple SLIP interfaces, you will need to modify the main slip driver to work with an explicitly specified uart.

The slip driver is implemented here.

The SLIP protocol is defined in RFC1055.

The command in the sample above that uses QEMU attempts to connect UART1 to a socket file called /tmp/slip.sock, which is supposed to be a Unix socket. However, in order to set up SLIP on a Linux machine, we need a terminal device (similar to what you would have with a hardware UART).

Therefore, we utilize a utility called "socat" to create a virtual pseudo terminal (PTY) and create the Unix socket file to which QEMU can then connect:

If you now run the same "run" command, you will see that the example is attempting to connect to the MQTT server:

The packets are currently being sent from the MQTT stack in Zephyr via the SLIP interface (uart0) and arriving at the "/tmp/slip.dev" interface, which is the UART counterpart on the Linux side.

The terminal can usually be configured to run in SLIP mode by using ioctl call SIOCSIFENCAP and passing parameter set to "cslip". This is demonstrated by the utility "slattach": https://github.com/mirror/busybox/blob/master/networking/slattach.c

However, this method doesn’t work with a pseudoterminal. So we need to use a custom utility for this in this case.

This utility also includes a SLIP protocol parser that completely bypasses the Linux kernel SLIP driver (which would otherwise be used if you use slattach on a real UART).

It creates a tap network interface (tap0) and then executes the following commands on that interface:

Unfortunately, the IP addresses in the default net-tools package are hardcoded, so you will need to modify the utility for your own system if you want to use it with more flexible settings. For example, if you change your Zephyr IP address to something other than 192.0.2.2, the utility will stop working.

In this case, we are doing the following:

While this is sufficient for communicating with any software that is listening on 192.168.2.2, it is not enough to send packets to other networks.

To be able to send packets to our MQTT server on a different network, we will need to enable routing as well. On the Linux side, we need to do this:

This will apply routing rules to all packets coming out of tap0.

Communicating with the MQTT server

We can now modify the MQTT example to connect to our MQTT broker outside of the local network. This way, we should be able to see the messages.

Rerunning the example now successfully shows that messages are delivered:

If you subscribe to the "sensors" topic at the MQTT broker you will also see the message results:

This concludes this tutorial on using serial UART for transparent embedded networking.

The main points I would like you to take away from this article are:

Become a student to learn more

Are you looking to advance your career in the embedded field? If so, then our Embedded Firmware Development Training is the perfect place for you to take your skills to the next level.

With this comprehensive training program, you’ll learn the technical ins and outs of embedded firmware development and how to create reliable and efficient software for a variety of devices. You’ll be able to start working with Zephyr RTOS and Swedish Embedded Platform SDK to design and implement custom firmware solutions for a wide range of applications, from consumer electronics to industrial control systems.

You will also be able to join weekly Live Q&A and get help if you get stuck.

Don’t miss out on this exciting opportunity to become a leader in the field of embedded firmware development.

Sign up as a student now and take the first step towards a rewarding and successful career in embedded firmware development! 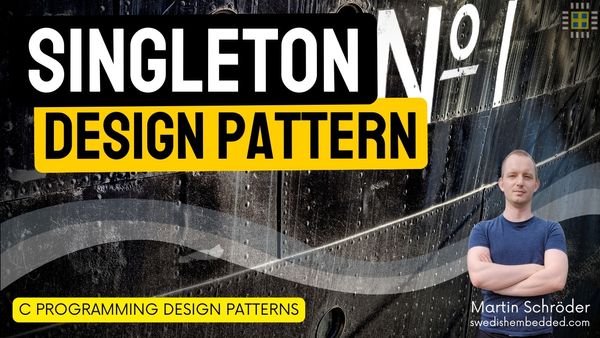 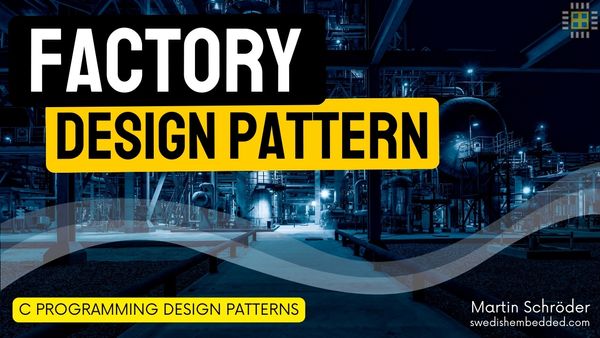 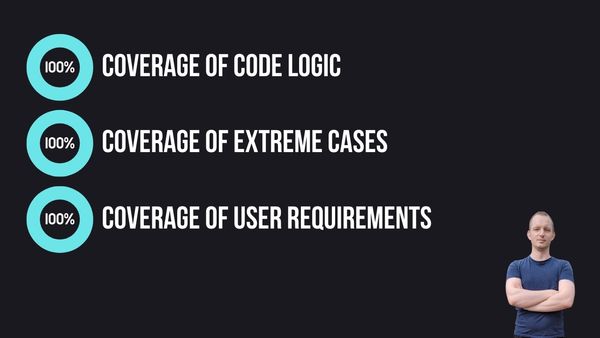